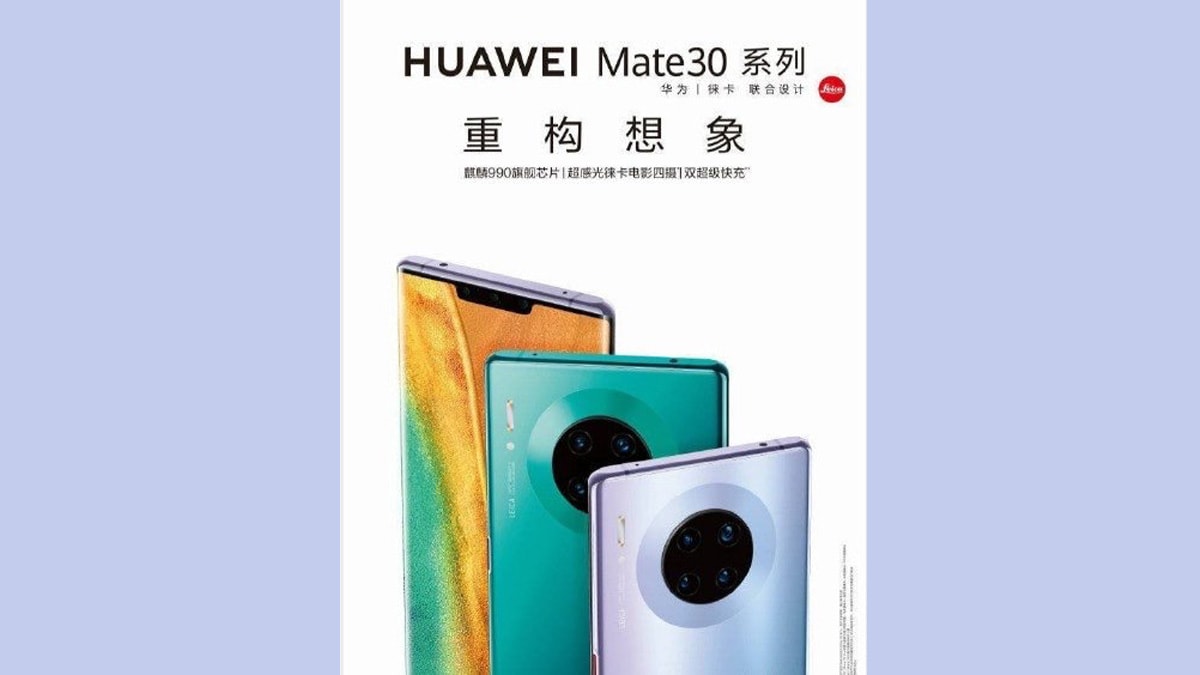 The alleged Huawei Mate 30 Pro is looking good, if this image is true

We’re about a month away from when Huawei is supposed to unveil its new flagship phones, which will most likely be the Mate 30 series. We have seen renders and supposed live images of the phone leak before, and as we inch closer to launch day, we have yet another leak. This alleged marketing image gives us a glimpse at the front and back of the phone, which shows a circular layout for what looks like four camera lenses. It’s sill unclear what type of cameras we can expect but going by what the P30 Pro offers, we should expect the usual trio of standard, wide-angle and telephoto, along with a Time of Flight (ToF) sensor.

The image, circulated on Weibo and tweeted by tipster Ishan Agarwal, shows, what looks like a promotional image for the Mate 30 Pro. Some of the writing is in Chinese along with the numbers “990” that hints at the fact that Huawei’s Kirin 990 SoC could debut with the new Mate 30 series. The image looks a little suspicious since the quality isn’t great but if true, then the Mate 30 series or at least the Pro model will have a shallow but wide notch. We like having secure face unlock so until companies can figure out how to hide 3D sensors under the display, we don’t mind it.

The biggest change in the design, again if true, is at the back of the phone. We see four camera sensors grouped together in a circular fashion, with the flash placed vertically next to it on the left. The flash module is also elongated, which could indicate the use of a Xenon flash. There’s plenty of Leica branding all over, which means the cameras will continue to be tuned by Leica. We can’t see the bottom of the phone but the image does show a right-mounted power button and what looks like an IR blaster on the top.

It’s really hard to tell if this is the final version of the phone, since we’ve seen the Mate 30 Pro leak before in various designs. Previously in June, we’ve seen alleged phone cases and renders which showed a rectangular layout for the rear cameras. Renders also showed the phone having a hole-punch display for the selfie cameras. A month later, another render popped up on Weibo which showed a circular camera module, which housed the four cameras and the flash. Recently, we also got some alleged live images of someone using the Mate 30 Pro in public. The phone was in a protective case, with a flap for where the camera would be. This was clearly a deliberate attempt at masking the actual design of the phone, which was probably being tested by a Huawei employee.