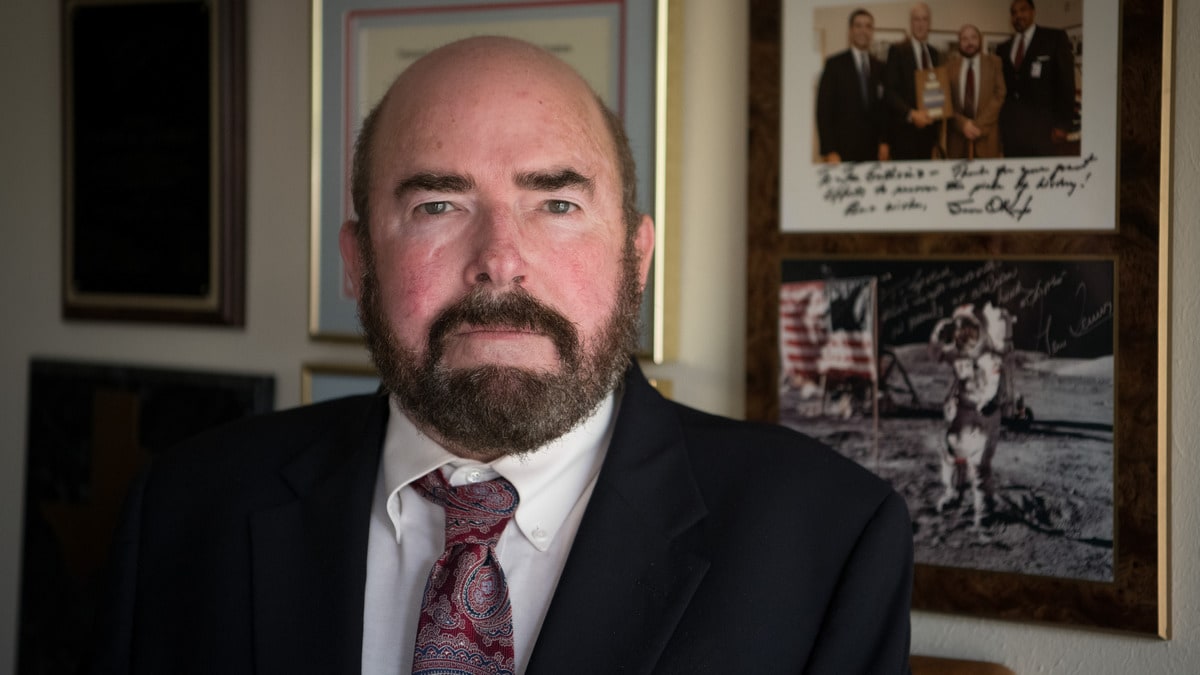 Joseph Gutheinz, an attorney known as the “Moon Rock Hunter”

After Neil Armstrong took a “giant leap for mankind” on the Moon nearly 50 years ago and collected rocks and soil along the way, Richard Nixon presented lunar souvenirs to every nation – 135, at the time.

Dozens of the “goodwill” moon rocks – some only the size of a grain of rice, others as big as a marble — have since gone missing, and Joseph Gutheinz Jr is on a mission to find them.

“Some people go rock hunting,” Gutheinz said in an interview with AFP at his law office in a Houston suburb decorated with awards from NASA and the US military. “I go Apollo-era rock hunting.”

Gutheinz’s quixotic quest to track down missing moon fragments intersects with the coups, wars, assassinations and other political turmoil of the past half-century.

The journey features a colourful cast of characters — from a Texas billionaire and a Honduran army colonel to a Las Vegas casino mogul, not to mention the late Spanish dictator Francisco Franco and the Ceausescus of Romania.

Gutheinz, who teaches college courses in addition to practicing law, retrieved one moon rock himself through an undercover sting operation. His criminal justice students have located 78 others as class assignments.

Moon rocks collected by Apollo 11 and 17 were given to every country and the 50 US states.

Encased in clear Lucite, they were affixed to a wooden plaque that featured a miniature flag of the recipient nation, which had been flown to the Moon.

Some have been stolen, ending up in the hands of private collectors who paid millions of dollars to own a tiny piece of Earth’s satellite.

Others have simply been lost or destroyed.

‘Operation Lunar Eclipse’
Gutheinz, a former US Army helicopter pilot and intelligence officer, is determined to restore the missing rocks to their rightful owners.

“These were gifts,” he said. “We didn’t give them to individuals.

“I wanted to make sure that we took these pieces of history and we gave them back to the people.”

Gutheinz became involved with moon rocks while working as a special agent for NASA, where he ferreted out corruption among contractors by day and studied for a law degree at night.

“After the Apollo 11 landing, con artists were going door-to-door selling bogus moon rocks to the hopeful and the unsuspecting,” he said. “I didn’t like that.”

“We went after the con artists,” Gutheinz said. “What we found was the real thing.”

They put an ad in USA Today saying “Moon Rocks Wanted” and were contacted within weeks by a man named Alan Rosen, who offered to sell them an authentic moon rock for $5 million.

Rosen handed over the moon rock in a Miami bank vault, where it was impounded by a US Customs agent posing as a bank officer.

“It was not until we actually seized the moon rock that we learned it was the Honduras Apollo 17 moon rock,” said Gutheinz, whose desk features a replica of it mounted on a plaque.

“There was a military coup in Honduras,” he said. “And the dictator that came in gifted the moon rock to one of his colonels to say thank you.”

The Honduran colonel had originally demanded $1 million but Rosen ended up buying it for $50,000, said Gutheinz, who retired from NASA in 2000 to set up shop as an attorney.

The moon rock was eventually returned to Honduras after a years-long court case.

‘I’m going to find it’
A stolen moon rock given to another Central American nation – Nicaragua – also underwent a circuitous journey.

The country’s Apollo 11 fragment ended up with a Las Vegas casino mogul named Bob Stupak, who bought it from a Baptist missionary who had obtained it in Costa Rica.

Stupak displayed it for a time in his Moon Rock Cafe but when the casino owner died, Gutheinz was contacted by his lawyer, who asked him what he should do with the moon rock.

“Give it to NASA with the promise that they’ll return it to Nicaragua,” Gutheinz said he told him. “And that’s exactly what they did.”

While the Honduran and Nicaraguan moon rocks ended up going home, dozens of others remain unaccounted for.

Spain’s Apollo 11 moon rock is believed to be in the hands of the family of the late Spanish dictator Franco.

“The story is that one of Franco’s grandchildren tried to sell the Apollo 11 moon rock in Switzerland and that was blocked by Interpol,” Gutheinz said.

One of Romania’s two moon rocks also is missing.

“After the Ceausescus, Nicolae and Elena, were executed on Christmas Day 1989, the estate of this horrible communist dictator sold it to some capitalist,” Gutheinz said.

“It’s out there somewhere and someday I’m going to go find it.”

Gutheinz is pretty sure he knows where Ireland’s Apollo 11 moon rock is, but it’s unlikely to be recovered any time soon.

It was housed in the Dunsink Observatory in Dublin when a fire erupted in 1977, and the debris ended up in a landfill